July 2020:
A letter dated 9 July 2020 from David Morris, Consultant to Frontier Estates Limited, sent to a resident on Marston Road, explained 'We now have realised that our post-graduate accommodation scheme cannot be delivered because of a change in planning policy'. See bullet point  'The Emerging Oxford Local Plan 2036' in the notes below.  Frontier's planning application was formally withdrawn on 28 August 2020.   A related article appeared in The Oxford Times, on 1 September 2020

Frontier, who had already bought one of the properties intended to be part of that scheme and had a contractual position on two others, had an alternative proposal in mind.  However, in the meantime Cantay Estates bought the Gelder's yard site but not the two semi-detached houses fronting Jack Straw's Lane, which are being retained by the owner. Their Managing Director, Mr A M Nolan, wrote to the owners of one of the properties bordering the site stating 'Cantay Estates have acquired the former Gelders Yard from the Hewletts and we will be proposing a more modest development of family housing for the site, commensurate with the area' - see Mr Nolan's letter

The 11 Dec 2019 Revised Covering Letter asked, near the end, under 'Procedural Matters', for the description to be 'reworded to ensure that GTC and Frontier have sufficient flexibility over any potential minor material changes in the future’.
The 'rewording' to ensure 'sufficient flexibility' would:
a) remove the NUMBER of student bedrooms and the ACTUAL AREA allocated to 'Office space'
b) remove the 'a' from the B1(a) category given for proposed use.  B1(a) restricts use to offices 'other than a use within Class A2', whereas 'B1' alone allows all three B1 categories:
A change to the description of development (the text entered on the application form for planning permission at '5. Description of the Proposal', which is also shown at the top when the 'Details' tab is selected on viewing the application on the City Council's website) could be sought at this stage but, if the applicant wishes to have amendments made after planning consent has been granted, no change to that Description is possible, given the ruling of the Court of Appeal in November 2019 (Finney v Welsh Ministers & Ors [2019], see below).  However, in some circumstances conditions attached to a planning permission can be changed or removed, subject to the consent of a Planning Committee.
The relevant section from page 5 of the Revised Covering Letter of 11 Dec 2019 is given below (emboldening was not present in the original):

The Court of Appeal has recently clarified the scope of section 73 of the Town and Country Planning Act 1990*. The judgement has confirmed that that the description of development to which the original Planning Conditions were attached cannot be changed under section 73.

On this basis, we request that the description of development is reworded to ensure that GTC [Green Templeton College] and Frontier, have sufficient flexibility over any potential minor material changes in the future.

‘Redevelopment of the site comprising demolition of existing carpenter’s yard buildings and Nos 302, 304, 312 Marston Road and 1 and 3 Jack Straw’s Lane, and the erection of new buildings to provide residential dwellings (Class C3), student accommodation and office space (Class B1) ’.

In lieu of the quantum** being referred to in the description, we would propose that a Planning Condition could be included that sets out the amount of development proposed'. 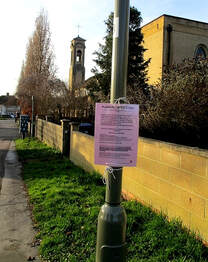 Second public consultation
Initially the deadline for comments was 30 January 2020 but following complaints of lack of communication with residents and insufficient time to submit comments on 16 January a resident in Marston Road reported that notices of the revised application had been put up in the vicinity of the site giving a new deadline of Wed, 5 Feb 2020 was set.
(The City Council's planning website showed this new deadline since a correction was requested on 29 January.)


Note: ​
Comments submitted in 2019 can be seen under 'Documents' on the City Council website page   The Statutory Expiry Date for consultation on the previous submission was 21 July 2019, extended to 31 Aug 2019.  In response to local opinion, an amendment was made to the plans shown at a public exhibition on 28 February 2019. The office block next to the church is now planned to be one-storey high, with a flat roof, instead of two storeys in order to prevent light being blocked from the east window of the church. 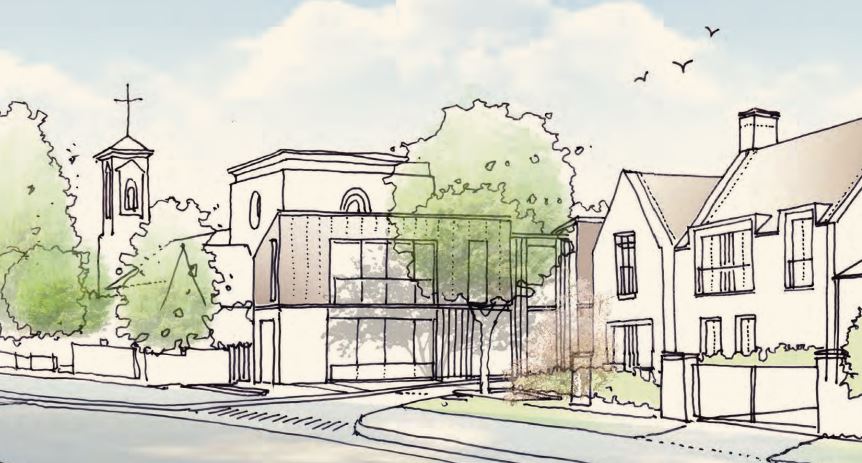 Original plan for a two-storey office block
​There are several references in the planning application to the convenience of the accommodation for students of both Oxford University and Oxford Brookes University, although at the public exhibition and consultation event on 28 February 2019 representatives of Frontier Estates were adamant that it would be reserved strictly for post-graduate students of one single Oxford University college.
​​